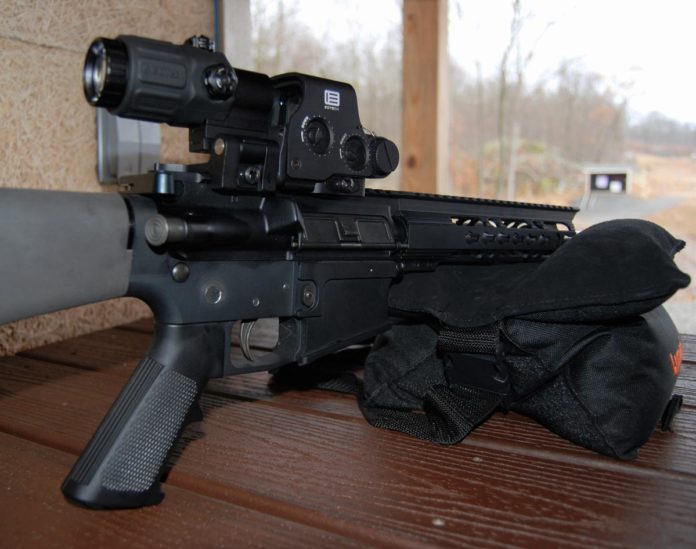 5D Tactical has been near the top of my list since we first did an article about their jig system. Since then, they have come out with some recent products including a new jig system (keep an eye out for a review of their updated jig.) What has gotten my attention, however, was their upper receivers.

To achieve the transition from an 80% receiver to a complete rifle 5D has merged the market and added proprietary products to consumers. They have essentially become a ‘one-stop-shop’ for individuals who are looking to build their own rifle and don’t have the tools necessary to complete an upper receiver independently. Not only that, they are keeping prices in a field that is attainable without sacrificing quality.

How do they do it? Well, 5D has spent quite a bit of time sourcing quality parts and developing an American manufactured upper receiver to match their 80% kits or already manufactured lower receivers. Even matching lowers from alternative companies that produce mil-spec products for the AR15. And in the last few weeks, 5D has even offered an ‘all-in-one’ product of an 80% lower system and complete upper assembly.

Our First Impression of The 5D Tactical .223 Wylde Upper Receiver

Let’s take a look at the upper receivers based on first impressions. They sent out one of their 16″ upper receivers with an M4 stainless barrel and C cut rail. The receiver looks, for lack of a better word, badass. The C cut rail is a feature that is hard to find reasonably priced, however, it is becoming more popular.

The barrel, being an M4 contour looks great. In stainless, the contour stands out and seems to break up the complete flow of the entire upper receiver. I would have preferred having a smooth barrel to make the look more streamlined. Regardless, the effect of the look is still completed with the M4 contour.

5D is producing 5.56, .223 Wylde, and 300 Blackout assemblies. We appreciate the 223 Wylde builds for overall versatility and ease of ammo procurement. As we have previously discussed, 223 Wylde can handle both 5.56 NATO and .223 ammunition. The 5.56, when fired from a 223 rifle, can produce more pressure than recommended for a standard .223 barrel and gas block. A 5.56 barrel can easily accommodate 223 ammunition, but it comes at a sacrifice of some accuracy and range. The 223 Wylde bridges these two ammunition types to efficiently be fired from a single rifle and barrel.

Taking 5D’s upper receiver to the range it was time to test out the overall performance. At a 1/8 twist, we weren’t looking to hit 800 yards out. However, we knew that 5D had produced a receiver that can easily put other companies to shame. To properly test this, we purchased both 5.56 and .223 ammunition. Not only that, we got the dirtiest ammunition available.

Loading the ammunition up, attaching the upper to our previously built 5D lower, and affixing the EOTech optics we got to work sighting in and learning about 5D’s newest addition to their lineup.

The first few shots with 5D’s upper were informative. The shots came through and rang true. With only 5 rounds loaded in the magazine, it cycled through each round with little issues. We started with Black Hills Ammunition as a baseline. They have been our baseline round in many of our preceding articles. Keep a look out for their review.

5D’s BCG moved smoothly, ejecting each round with no issues, and bringing the next in swimmingly. After about 20 rounds or so, we were finally sighted in and moved up from 100 yards to 150 with the EOTech magnifier and our lower quality ‘dirty’ ammunition. Three shooters took turns running the upper receiver through its paces. 150 rounds total.

Each of us came up with the same conclusions about the receiver and none of us ran into any jams, loading issues, or mediocre performance. At 150 yards each target was spot on. It did as advertised and while looking good.

Cleaning seems pretty straightforward so why have I put in cleaning into this article? After disassembling the rifle, I took an intimate look into the upper receiver. I knew from the beginning that the cheap, dirty ammunition would generate a lot more to clean. This is inevitably a contested fact that some ammunition is dirtier than others. However, this receiver seemed to show more dirt and soot than the other rifles we shot that day.

This could be a few things. The rifle itself may have a larger gas port allowing more soot to find its way back towards the BCG. It can also be that the BCG fit into the chamber could allow for some gas to escape while the round is heading downrange. Either in part or completely because of the carbine length gas assembly. Both are highly unlikely, as there would be other issues that would arise from both circumstances. Most evident would be recoil differences compared to other, comparable rifles. We did not have any noticeable differences.

I believe this extra soot was due to the ammunition we used mixed with 3 different shooting styles. The new, shiny receiver is also more prone to showing dirt and GSR. Regardless of the reason, the upper cleaned up well with a little extra work. I would advise only putting quality ammunition through this rifle. Think of it as a premium gas for your engine. This is especially valid if you have a stainless barrel.

5D has been hitting the market like a whirlwind. They are a bit more expensive than alternatives from SOTA Arms or Hardened Arms. For $400 you can still get an outstanding upper receiver (with BCG) with a stainless barrel and C cut Keymod rail, which would cost significantly more from alternative companies.

Better yet, for $490 you can get a complete 80% kit, less the jig system. For the price, you can’t go wrong. The options are straight forward and not overwhelming. Anyone would be hard-pressed to obtain a complete rifle for $490, let alone one you can put your own personal makers mark on.

While they may be new to the upper receiver market, 5D’s complete uppers and kits are worth keeping an eye on and picking up. I’m confident they will continue to make waves and take over some of the existing markets, given enough time.