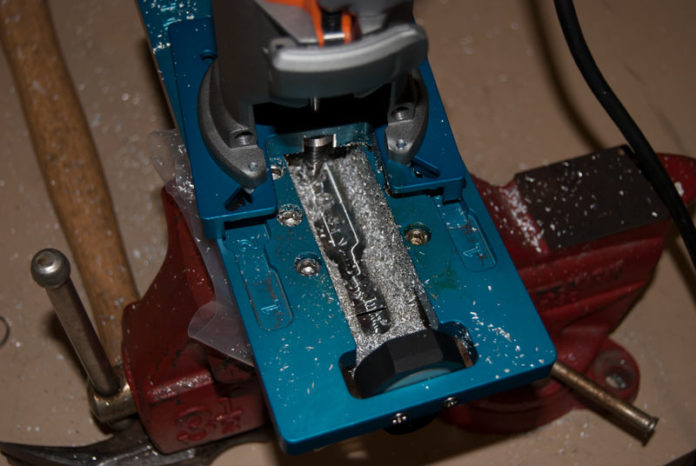 As an alternative to 80% Arms (See our 80% Arms Lower Receiver Build here) we reached out to 5D tactical to speak with them about their router jig system and lower receivers. It was an interesting conversation and we learned a lot about the differences between the two jigs. In our 80% Arms build we mentioned there is a new jig system which does look an awful lot like the 5D Tactical jig.

5D was kind enough to send their jig system for not only the AR15 but also the AR10 (keep an eye out for our AR10 series). There are a few interchangeable pieces and supplies but overall the 5D Tactical jig system was a new and different approach. They cautioned us on the use of the Ridgid R2401 router but offered to give us support no matter what router we went with. 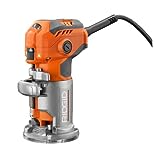 Outside of the Ridgid R2401 router there wasn’t a need for additional materials besides a drill. We were excited to get started and put this jig through the paces.

We pulled out the jig system and it looked like a crazy Kynex set cone haywire. There are significantly more pieces and parts compared to 80% Arms. This isn’t a bad thing as the pieces are designed to make a precise fit. While there are side plates it’s worth mentioning that there is an addition of a buffer tube threading brace and front takedown pin brace that attach to the upper jig plate. They also include a plate that attaches to the router itself and fits within the top jig plate.

In reality, there were fewer main pieces once the jig was put together. Unlike previous jigs, there was not a need to constantly change pieces. It was easy, precise, and even with all the extra pieces, it was able to be put together quickly. In addition, the side pieces didn’t push right up against the receiver itself, leaving a small space to protect the receiver from scratch. While we read the directions on assembly we overlooked the part that recommended putting tape on the receiver over where the fire control hole would be drilled.

Probably our favorite part of the entire experience was the need for only 1 pilot hole. We did not need to drill 6 times and go through constant battery changes. We also had to drill a hole for the fire control pocket trigger, but we decided to hold off until we absolutely had to do it. It did cross our mind but the worry was, if we messed up even a fraction of an inch we would not be able to control or correct it and the trigger hold would be out of place.

5D makes a customized milling bit with narrows of the base to fit into a ¼ inch router. This allowed us to use the same router we had and make large cuts at the same time. We got to work quickly after assembling the router plate to the router itself. A word of caution: it is recommended to continually check the guide piece screws as the vibrations like to jostle the loose.

The bit made smooth work of the beginning of the build. Again, we started without any cutting fluid. As time processed we added a lubricant/cutting fluid to the mix. It was a petroleum based lubricant and turned into a soggy mess very quickly. After a few passed and 20 minutes later we cleaned out the receiver and began using WD40.

Nearly 40 minutes in, and while using WD40, our cuts seemed to get rough and take a longer amount of. Learning from our previous build of American Made Tactical (read our review here) we took a look at the bit. It seemed to have lost an edge, but in reality, aluminum was melting and building up into the crevice. The excess material was too embedded to be comfortably removed and we changed to the bit included with our AR10 build.

10 minutes in, and a liberal amount of WD40, we ran into the same issue. Regardless, we caught it early enough to be able to save the bit and adjust our technique. Making shallower cuts, higher RPM, and slower speed made all the difference. We were able to move through the rest of the fire control pocket with no further bit complications.

The only concern we had was the actual router base plate guide screws. The kit calls for a removal and reassembly of these screws on 2 separate occasions, not including the original. While the router is moving it does add an excess of vibrations and friction. Because of this, the screws and guides become extremely hot. Take additional caution on this part of the process.

Lastly, our goal was to create the perfect trigger hole. We installed the drill guide one last time and made a perfect cut. Setting the router down the bit was too wide for the pilot hole. With all the past practice we had we were able to slowly lower the setting on the router while it was running, but we NEVER recommend doing this. Unfortunately, it doesn’t seem like there is an easy alternative, at this time. Despite this inconvenience, the hole came out perfectly.

Remember how I said we didn’t tape the sides before assembling the jig? We should have taped the sides. Just like the past builds, aluminum will travel up the bit and stick to a spinning bit. We ended up creating drill art in scratches to the side. This was our biggest disappointment because the rest of the build went extremely well and the end result was a fine looking lower receiver.

The jig, regardless of all the pieces, was very easy to use and held the receiver in place without any issues. Receiving everything was overwhelming and looked like the task would take forever. The system really is designed for a novice and having everything installed in one plate made the process go from a daunting maneuver to a streamlined build.

The lower itself was beautiful and the fire control pocket was near seamless. Using a router better recommended by 5D Tactical would probably have given us a streamlined final result. Even though the anodized coating is the same as other manufacturers it just seemed to scratch too easily. We will admit, we did not follow the direction which led to these scratches. If we had paid closer attention to detail there would, most likely, have been a perfect coating by the time we finished.

The jig is truly a universal system since the receiver is just floating there, free from direct contact except for a few key areas. Any mil spec lower receiver can fit and be milled, or altered, in this router jig system. This is the first of its kind and we are proud to have the opportunity to use it for our series.

You’ll never go wrong with this jig and system. Give them a call and try it out. We can promise you won’t be disappointed.