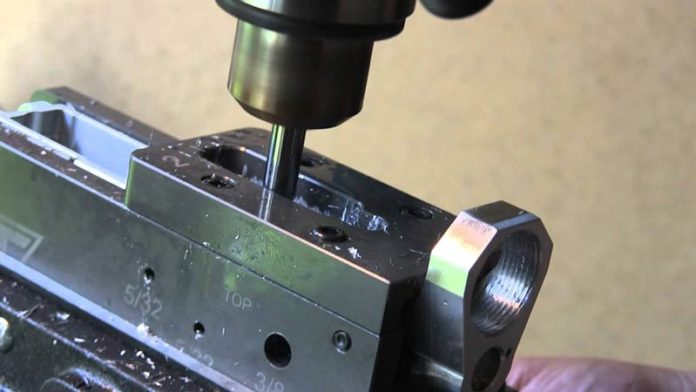 As we started this series we wanted to offer options for our readers (that’s you!) and decided to have multiple different receivers in comparable materials and costs. We aren’t trying to create competition, but we do want to offer an alternative option if you aren’t happy with another company. Another polarizing reason we wanted to showcase American Made Tactical was to make a 100% American made rifle.

American Made Tactical is a good price, a high-quality company that produces and sells only American Made products. Even the springs they carry in their LPK (lower parts kit) are 100% American made. While this may seem trivial the more companies that produce and buy from American Companies and manufacturers, the better the American economy will become.

American Made Tactical also offers a jig system which is eerily similar looking to 80% Arms Gen 1 jig system. There are definitely some major differences between the two, but it is worth mentioning that the jig system would be used nearly the same way. Unfortunately, American Made Tactical did not offer to supply a jig for us to review so we are not able to give a complete review of their lower with their build.

Because of our lack of major milling tools, we felt it best to use our 80% Arms Jig with the American Made Tactical billet receiver. It fit like a glove with no major issues. There were some differences between the AMT (American Made Tactical) and 80% Arms lowers that may be important to some users.

There is no need to add tools outside of what we used for our original router jig builds. The 80% Arms jig fit perfectly with little to no error in fit and we were excited to give this lower receiver a once over.

Following the same direction and use as laid out by the 80% Arms directions we got to use on the pilot hole drilling of the AMT lower receiver. In our past article, we spoke about the difficulty of using a battery operated drill for this.

With the addition of the AMT receiver, we found that the AMT receiver seemed like a much stronger aluminum. We might be able to say it was poor power consumption on the drill or lack of experience, but in our opinion, the receiver was a harder, or more dense, aluminum.

In addition to the dense material we again decided to forego the cutting fluid, which may have made more difficulties than necessary. Whatever the reason, it’s not a negative. The dense material will most likely hold up better over extended use and abuse. In total, the drilling took about 4 hours using 2 drills, 4 batteries, and constant charging.

Moving straight to the milling, we pulled out our Ridgid 2401 Router, set up the router plate, and continued on. Learning from our past build the depth was set to a very shallow initial cut and we increased the PRM. It continually cut like butter.

We learned more than we thought we did during the first build and it seemed to improve the quality and time during our AMT build. During the milling, we were able to adjust the router without turning it off and restarting, as well as using the shop vac to keep the majority of aluminum shaving at a safe distance. We were happy with how things were going.

Now, any good story obviously has to have some kind of issue to make it worth the effort. And so, after an hour of milling, we ran into our first issue, the chuck. Once again the chuck loosened itself up while running making the big shake and slam against the side of the fire control pocket. No major damage but we learned to check the bit more often. As we examined the bit for the damage it appeared as if the bit itself had a broken edge. Could this be why the bit came loose? Examining the cuts inside the receiver led us to discover a poorly cut surface. While not detrimental to the use of the receiver it was still not what we wanted or anticipated.

Could this be why the bit came loose? Examining the cuts inside the receiver led us to discover a poorly cut surface. While not detrimental to the use of the receiver it was still not what we wanted or anticipated.

Setting up the router again we continued on and began to move a bit faster. The noise started to change from a deep cutting/grind with a high pitched mechanical whir to a high pitched grind. The cutting speed seemed to slow down despite the increased RPM on the router. We stopped our work and looked closely at the cutting bit.

This time, it looked as if all three cutting edges had come off, but in reality, we were moving so quickly that aluminum had softened from the heat and compacted itself into the grooves of the router bit. Carefully working it out with a screwdriver the bit came out clear again and we continued on.

Now, we aren’t 100% sure what caused the aluminum to set to the router bit, but we think it was a combination of 3 things:

So, we moved forward and reduced our cutting depth, even more, slowed our speed, and added a liberal amount of WD40 to the fire control pocket. Roughly 20 minutes later we were done!

Again, this part isn’t worth mentioning. However, we wish we had covered the sides with tape before we put it into the jig. As we drilled the safety switch hole and trigger pin holes we caught a lot of shavings mixed with WD40. While not horrible it did scratch the surface a bit, especially by the Safety Selector hole.

AMT made an incredibly strong and durable receiver. Their prices are very competitive and selling only American produced and manufactured products should put them at the top of many people’s lists. Realistically, you can get everything you need directly from them, excluding the router itself. Even if you have already tried another jig system these receivers are well worth the effort and time.

Keep an eye out for our next part of the build; Installing the LPK into an American Made Tactical AR15 lower receiver.