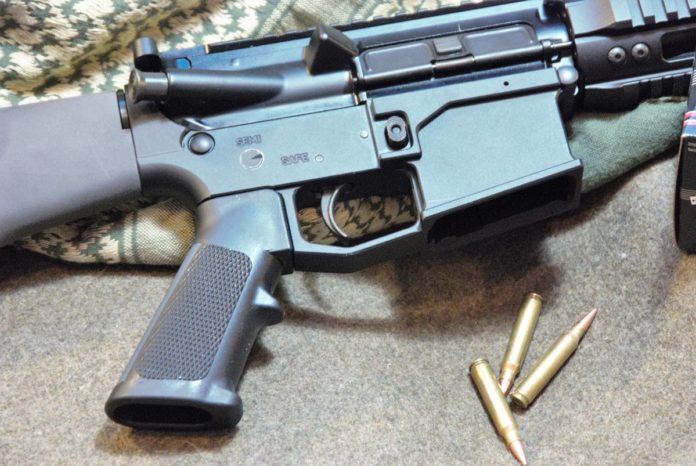 Hardened Arms is a company that has made a name for itself in the industry by manufacturing and creating quality rifles. Their prices can be accommodated by any budget. Headquartered in Washington State, Hardened Arms produces AR15, LR308, and machined parts that have a quality hard to beat.

The range of products available (pun intended) for the AR15 platform is extensive. Hardened Arms has done a fine job of accommodating most of the major, popular caliber options for this platform. They also continue to work on new calibers, handguards, designs and options for both military/police and civilian utilization.

Their machine shop is on site and allows then the benefit and convenience of quickly mocking products up to the test, without having to go through an extensive manufacturing period.

What this all boils down to is quality. Since they manufacture all products themselves there is no room for error. There is no option to blame a different manufacturer or assembler. This also means they stand behind their products and are incredibly proud of each and every rifle or part that leaves their facility.

One of my personal preferences is to find an all-American company that supports all-American growth and development. In order to make prices affordable, Hardened Arms has streamlined their manufacturing process to be exclusively in-house on all major and most minor components. They are so detailed that they can even track the raw materials down to the exact mine they purchased from.

This, however, is not always possible with American companies as many raw materials are not the same quality as those from other countries like Germany. Instead of having Germany product certain parts Hardened Arms receives the raw materials from countries like Germany. They produce major component in-house. They add to the American industry and lowering the cost for Its citizens.

I reached out to Hardened Arms when researching the budget entry options for our AR15 build. Explaining my goals and what we hoped to accomplish in this article series they sent out one of their complete upper receivers for our review. Two weeks later, in the mail came a standard 16″ 5.56/.223 AR15 complete upper receiver with a quad-rail.

As our team took the receiver in hand we examined it from tip to BCG. It came with a standard BGC (Bolt Carrier Group) and CH (Charging Handle). Both are necessary to fire and use the rifle. The BCG holds the firing pin, allows the round to be chambered and seated, and also moved back and forth inside the rifle. The CH allows a user to ‘rack’ or pull the BCG out of the way so a bullet can be loaded into the chamber. With most companies, a BCG and CH are generally sold separately and do not come with a complete upper receiver. This is something to keep in mind when making an order.

The top is what’s called a ‘flat top’; this means there is no mounted optics or riser. With the introduction of the M4 for military use, the flat top has gained popularity and allows a user to attach optics they see fit. This Hardened Arms flat top moved seamlessly into the quad rail, extending the Picatinny rail over the barrel.

The barrel is a Melonite barrel. This is a better alternative to a standard chrome lining. It stuck out from the hand-guard into a seamless finish. Topped off with an A2 flash hider (NOTE: Check local laws about flash hider attachments. Some states do not allow flash hiders. Other states may allow flash hiders but require the barrel to be ‘pinned’ making it impossible to remove from the barrel). This particular barrel came in at 16″ which is considered a standard length by many states and shooters. Shorter barrels can cause difficulties with accuracy while longer may add unnecessary weight when shooting relatively short distances.

The hand-guard was a quad-rail; meaning, the hand-guard had Picatinny rails on the top, bottom, and both left and right sides. This allows for attachment of multiple accessories, optics, scopes, flashlights, mag holders, etc. There are a plethora of Picatinny accessories that can easily be utilized in a configuration like this. It was also attached with 8 bolts, 2 in each corner closest to the receiver.

The most noticeable characteristic of the receiver was the stamped name of Hardened Arms on the left side. It stood out in a bold white letting anyone who saw it know who manufactured this beauty. Their website even shares guidelines on the best way to clean the lettering area. This is a truly unique part of the Hardened Arms receiver.

It was time to attach the Hardened Arms upper receiver to our previously milled lower. We opted to marry the upper with our 80% Arms lower receiver. We did this for several reasons. The first being, the finish on both the upper and lower receivers were the closest match in color and shine. Secondly, we wanted to use an aluminum lower receiver with our first build as it is the most common and desired option in AR15 materials.

If you remember from our 80% Arms build we had some difficulty with the safety selector switch installation. Even though we felt the issue was resolved it still made us nervous to put a functioning upper on a lower receiver that gave us consistent problems. None of these problems were related to 80% Arms, Aero Precision or Hardened Arms, but were due to a lack of skill during our milling and installation.

So, we did a dry fit. The upper and lower fit well together with very little variance. Looking through the right side, the holes didn’t seem to line of perfectly. We were so close we knew the pins would go through with no problem. Pushing the rear takedown print through there was a content ‘click.’ No heavy pushing, no shoving, and no hammering were needed. Next, we attempted to push the front takedown pin through. Let’s focus on that attempt.

Everything looked great, no marks or misalignment. We removed the BCG and CH in order to reduce the weight as we attempted to install the upper receiver again. Sliding the receiver on the rear takedown pin pushed through seamlessly. The front takedown pin pushed through, got a little caught, on then found its way to the other side with no issues. We all breathed a heavy sigh of relief.

I know what you’re all thinking. We should have started with the front takedown pin. I’ll be honest with you. When we realized the rear takedown pin had to be removed once more it all made sense. For those of you reading, who are still wondering why it didn’t work the first time let me explain.

With the CH and BCG in place, the BCG was pushing against the Buffer. The buffer was primed with the spring set in the buffer tube. When installing the rear takedown pin first the buffer and spring were pushing against the BCG. This made the entire upper receiver float 2 or 3 millimeters over its intended resting point. Removing the BCG resolved the issue, but we still needed to insert the BCG and CH again. This time, it was all figured out.

Pulling back the CH it moved the BCG into the buffer tube, released it slowly, and watched it all fall into place. We now had a functional rifle in hand. Despite not building the upper ourselves we had a serious sense of accomplishment and pride in what we did. There was just one last thing to do.

the future) and headed out to Griffin and Howe Shooting School (look for our article of G&H).

Arriving at G&H and began to get everything set up. To test the rifle, we would be using Black Hills Ammunition and a HexMag Magazine. These two companies were chosen for the initial test because of their reputation, quality, and customer service. Keep an eye out for articles about our experience with Black Hills and HexMag in the future. In addition, we needed some optics and borrowed EOTech HHSII with a magnifier from G&H.

Taking aim downrange we let the trigger loose. It fired and cycled smoothly low kickback, and landed with a gentle clank. We adjusted our sights and shot again. Smooth action, consistent cycling, and a dead center hit. Our safety switch was working and moving perfectly. So, we reloaded our magazine and decided to do a quick rapid fire, standing test.

We checked our hits and noticed there was a slight upward and with the right shot placement. Looking the rifle over once more we realized that two of the bolts which held the hand-guard into place had come loose. This allowed the hand-guard to dip down and to the left. Since our optic was affixed to the handguard’s Picatinny rail, we knew it was an easy fix. Something we could quickly fix at the shop.

We were all quite pleased with the accuracy and smooth action of the Hardened Arms upper receiver assembly. With a few minor adjustments and upgrades, anyone could make this receiver a personal addition to their collection. While this 5.56/.223 setup won’t win any distance awards it’s a great entry-level option for someone who wanted to get engaged, involved, and not spend a fortune.

Without factoring in the cost of the lower receiver and lower parts kit, this AR15 will run you about $330 WITH the BCG and CH. Hardened Arms also has constant sales and has brought that price down drastically, in the past. Considering some of the big-name manufacturers sell for 800 to 1,000 dollars Hardened Arms price is a steal!

Factoring in all costs someone is looking at $90 for the lower receiver (no machining jigs or tools), $134 for Aero Precision LPK and stock, and $330 for a Hardened Arms receiver. You’re still only looking at $554 for a quality AR15 that you can say you made. If you want to get technical, you could say you ‘assembled’ it, but overall this rifle is going to be unique to you.

While I think this receiver is great, there would be a few personal changes I would have made, which Hardened Arms does provide in their product lineup.

I say this because you need to have something to protect your hand from the Picatinny rail system to use it comfortably. The 4-way rail is great for forwarding grips but seemed very bulky and difficult to use comfortably. Hardened Arms does offer options for this and even manufactures their own LumaShark handguards.

I personally love the logo and would want it on all my Hardened Arms receivers. What I don’t want is a bright white section on a dark rifle. It’s a great option for Hardened Arms and free marketing, but the survivalist in my just isn’t a fan of the color.

Yes, we can buy them someplace else. However, for a budget conscious consumer like myself, I’d like to go to one place that would have an essential to easily be added to my order. It saves me the time of searching around for sighting options.

Overall, we liked this rifle so much that we purchased it from Hardened Arms. The ease of customizing, upgrading, and fine-tuning this well-crafted rifle makes Hardened Arms a definitive contender in the AR15 world. Hardened Arms is one company worth following closely and look forward to their newest products.