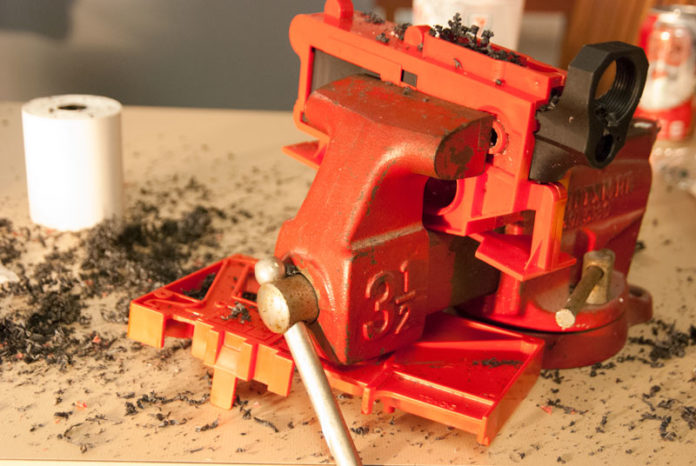 We decided it would be best to show the pros and cons of each material. Our friends at Polymer80 and 80% Arms had donated some lower receiver for our build and we will give our experience of their products and materials. Read our 80% Arms article Here.

It was our impression that polymer material would be easier to build than aluminum. Polymer is a softer material, reinforced, and used extensively in intricate pistols over many years. Obviously, Polymer80 had some hurdles to overcome, especially since polymer can bend and flex under stress and recoil. In addition, Polymer is not as heat resistant as an aluminum receiver, which is a concern when building a firearm. However, with Polymer80’s history, great reviews, and polymer materials improving leaps and bounds in the last decade we decided it was worth giving it a try.

Polymer80 sent us their new G150 Phoenix V2.0 AR15 lower receiver. It comes solid except where the magazine is inserted. We had to mill out the fire control section of the lower, which was filled completely with the Polymer material. The G150 came with a jig of sorts, made from a plastic material which could be removed easily. The red color lets you know it’s not part of the actual firearm. That’s important to know, for a novice!

Our first impression was positive. It seemed stronger than what was anticipated and had a great dark tone, to it. Weight didn’t seem much lighter than an aluminum receiver but we are no expert. Strong, rigid, and dark… yep, that’s a receiver.

No directions come with Polymer80’s lowers. They have a small card with a QR code, which did not work for me. A quick google search (if you want to use google for this) brought up all the Polymer80 direction lists. We opened the G150 and got to work reading. That was the hard part. The directions weren’t too clear cut. In our head, we picture this like a LEGO build not a SAT test. Regardless, the directions seemed easy enough after being read a few times. The great thing is, there are tons of videos online about how to mill their lower receivers. Some are legitimate while others try to destroy the lower receiver with improper building techniques. The thought crossed our minds.

So, we got to work. The first thing was to drill out the side holes on one side, then the other. The jig was fine for this but the red plastic got caught by the large drill bit and spun the entire lower and jig viciously in circles. We tried again with the same result. What were we missing? Clamping it down to the table we started the drill far away from the jig and prayed the hole would line up correctly.

Flipping it over we tried again with the same, circular result. As the two holes finally met each other we let out our breath in relief. The smaller holes had no issues and went through the receiver with ease.

Holding the receiver and jig in place with a vise we drilled out the center, fire-control holes. The drill bit didn’t have a depth gauge, like the milling bit included in the kit. We tried to eyeball it and may have gone a little too shallow in some parts while a little too deep in others. Following the relative success of the PF940C build (read it HERE or coming soon) we pulled out our cheap, Chinese Dremel kit

and got to work. Slowly, we began to remove the Polymer material but more often it just melted into a large blob that we needed to cut out anyway. This was slow work.

Moving on, we decided to attempt to use the milling bit. We set one deep hole with the milling bit attached to our hand drill, at the recommended depth. We drilled down, just enough, and finally had a depth that we could drill to with our regular drill bits. 6 holes later, we were ready to mill! Taking that milling bit back out, attaching it to our drill press, and preparing the lower with jig we got to work.

The first plunge of the drill press was easy and smooth sailing. The second plunge in and the bit wiggled itself loose slamming against both sides of the receiver cutting deep. If we could have taken a picture at that very moment it would have been filled with disappointment and regret. We continued on, determined to get it right. Resetting the bit, checking rps (setting at 2000 rpm), and preparing once more we slowly dropped the bit into the lower receiver. Slowly, slowly, and then….. WHAM! The bit began to wiggle, shaking the entire receiver side to side. Needless to say, the receiver was ruined.

Luckily, our friends at Polymer 80 had sent us a second one to work with. We began the same way, having learned from the previous failure. Drilling into the material, careful to not go too deep then finishing with one plunge of the milling bit we were finally prepared to drill the side holes. Holding it in place we drilled with the 3/8th bit.

Almost immediately it caught on the plastic again and spun the entire jig, and lower, out of our hand and onto the floor. Heading the warning and then ignoring it, we decided to drill while it was set in the vice and with relative success.

Once again, we began to mill out the fire control section with our drill press. Once again, we had a perfect first plunge. Once again, the second plunge caught the material and ripped the lower out of the vice and the jig, shattering it on the floor. This wasn’t a slight failure, but complete catastrophe. The last thing to do was call Polymer80.

Polymer80 was quick to respond. They gave us some minor instruction to avoid the same mistake which included tightening the vice, increasing the RPM, and removing as much material as possible before milling. In addition, they sent us 2 replacement lowers and requested an image of the destroyed lower receivers for verification. Two days later, I had the new lower’s in hand.

Learning from our previous mistake, and we hope you do as well, we got back to work for the third time. The side holes were drilled again, with no change in result. The bit still caught and there seems to be no way to avoid it. This time, the holes for the safety switch were slightly oblong, but that was our fault, not the jig. Moving onto drilling out the fire control section we decided to drill shallow this time to be on the safe side. No problems, no binding.

Moving forward, the drill press was set up and ready to go. We milled a few millimeters before the bit worked loose again and slammed against the side. After some well deserves cursing we examined the lower and realized it was salvageable.

So, we took a new approach. We pulled out our 80% Arms Jig system and put the Polymer80 lower into it. Surprisingly, it fit like a glove. Since we had already used the jig for the 80% Arms lower receiver the setup seemed fairly easy and straightforward without any complications even though the Polymer 80 lower is significantly wider.

And with that, we used out router instead of out drill press. What we soon realized is that the router bit heats up very quickly and tends to melt the polymer instead of shred it to pieces. The smell was strong and we pulled up the shop vac.

Near the end of the milling, the bit was very difficult to control with the melting polymer material. Even the shop vac couldn’t get it all out. Also, since we drilled the fire control pocket a little shallow, to avoid going too deep, going deeper with the router became a challenge. It’s at this point, that we believe a mistake is more likely to happen.

10 minutes in and we had a completed, albeit imperfect, lower receiver. The second ‘new’ receiver was milled the same way and without any complications.

Overall, we are pleased with the build, but there are some serious hurdles we needed to overcome. The system also works well, just not as well as we have hoped. There are quite a few things we learned during this.

A few updates: Polymer80 has shared information that a new Jig will be released shortly. They have heard the complaints and will be releasing the new jig sometime later in the year. We’re looking forward to trying it out and making a 100% Polymer 80 frame using only Polymer 80 supplies. We will keep you informed of any news.