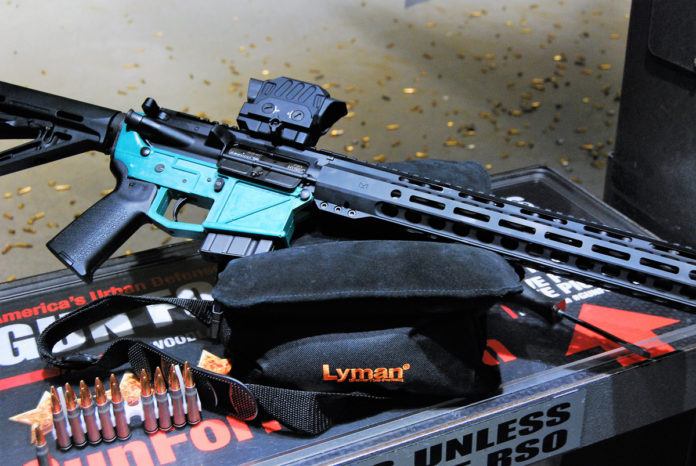 Again, hitting the market hard is Hardened Arms with their new Crucible Heat Shield System (patent pending). The system is designed to be an integrated muzzle device and a shield that attaches to their quad-rail, free float handguard. They are pulling in a design that hasn’t really been seen before and applied it in a unique way. This design requires two or three glances.

The system comes in 5.56, 7.62×39, and 300 Blackout ranging from 7.5, 10.5 and 16-inch barrel lengths. Consisting of their Crucible(TM) muzzle brake and a shroud of aluminum to prevent a user from touching the Crucible with their bare hands or gear.

Born from an accident of melting carpet the heat shield was added to the original design. The purpose is simple: don’t let anyone touch the hot part. This seems like a straightforward task but many things can come into contact with a hot rifle and cause damage. With the Crucible Heat Shield, there isn’t as much worry. Shoot and set it down, that seems to be the motto.

There are no options at this time to add the system to an existing rifle. Those with Hardened Arms rifles and uppers are encouraged to inquire about the possibility of having it added. Because of the sensitive nature of the heat shield mixed with the muzzle brake the possibility of damage from the improper installation is high. That is why, at this point, the system is only available on a Hardened Arms proprietary rail system.

We had the opportunity to assess the 7.62×39 Crucible Heat Shield System with a 16-inch barrel. We opted for the 16-inch barrel for a number of reasons, weight not being one of them. The extra 2 to 3 inches that consist of the Crucible Heat System adds a significant amount of weight to the muzzle of the rifle.

While this shouldn’t eliminate the 16-inch from consideration it would be more comfortable to have this system adapted or used on a 7.5 or 10.5 length barrels.

In addition to the added weight, there is a caveat for ‘tactical’ shooters. Especially those which employ a C-clamp shooting grip. Since the rail transitions near seamlessly from the quad-rail to the shield system it is difficult to gauge exactly where the barrel ends.

It wouldn’t be uncommon for an overenthusiastic shooter to position their hand too far forward, risking injury. To combat this Hardened Arms installs a hand-stop attached to the lower Picatinny rail.

We set to operate this system with our EO Tech HHS II EXPS2-2 and magnifier starting at 10 yards supported and moving to 50 yards supported to sight in. After having sighted the optic zeroed in it was time to focus on the benefits or encumbrances of the overall system.

One personal preference about the 7.62×39 round is the control it generally offers. There may not have the range behind it like a 5.56 but can hold its own. This 7.62×39 was no different. From standing the shots were tight, controlled, and smooth. The weight of the rail helped to balance and maintain consistent placement with very little delineation.

To see if it was the caliber or the actual rifle we also pulled out the PSA 7.62×39 AR-47. With the same magazine and ammunition, we were unable to get the same consistency from the PSA as we did with the Hardened Arms Crucible Heat Shield.

That’s not to say PSA’s system is inconsistent. PSA with an A2 just doesn’t have the same muzzle control that Hardened Arms seems to have perfected with their Crucible.

Each round fired off in the crucible allowed us to focus on the next shot. We weren’t worried about compensating right or left. The optic was zeroed in, and it was known the rifle would put the shot right where it needed to be. PSA’s rifle meant we needed to re-aim after each shot.

The muzzle was less controlled but typical with a standard receiver and muzzle device. It would have been the same if the Hardened Arms Crucible System was not affixed.

When we ran into issues, it was due to the using the EO Tech magnifier and had nothing to do with Hardened Arms performance. 50 yards out is at the limit of our abilities to shoot within a 1-inch diameter without any magnification.

Accordingly, we put the magnifier to work and had to compensate for the change in dot placement. Once we adjusted everything properly the Hardened Arms rifle performed flawlessly each shot.

The heat shield did get warm, but not blistering hot as it could have been. It worked as it should and allows enough gas movement to stay firmly in place when used in conjunction with the Crucible muzzle brake. Overall, we were impressed with its smooth performance.

The weight was a major deterrent from attempting to use this as a tactical range gun. It would be best to stick with a shorter barrel or different system altogether. Holding the 16-inch barrel and shroud of aluminum was a challenge.

For a young shooter or someone who doesn’t have ‘arm day’ very often, this may be an overwhelming weight. 10.5 appears to be the middle ground of performance and weight.

Once Hardened Arms decides to change the build from a quad-rail to something else I believe the issue of weight will be rectified. A Talon or SDX rail would be outstanding on this setup. Each of these handguards has a different front finish which would make it impossible to affix the Crucible Heat Shield. It’s with much hope and anticipation that this may be a future update to the system.

While the shield system is well designed and implemented it’s hard not to wonder why there would be an urgent need for the shield in the first place. Are there many users grabbing the muzzle end of a rifle closely after shooting?

It’s believed that the purpose behind this Hardened Arms design was for Tactical and Operational pursuits more than recreational. That doesn’t limit it from being used recreationally.

So far there are 3 calibers and 3 barrel lengths currently on sale ranging from $280 to $380 USD. The price fits with the performance. A muzzle device and receiver separately would cost more than this system comes assembled. This is a great entry into tactical training without risking a few burns or holes in pants.