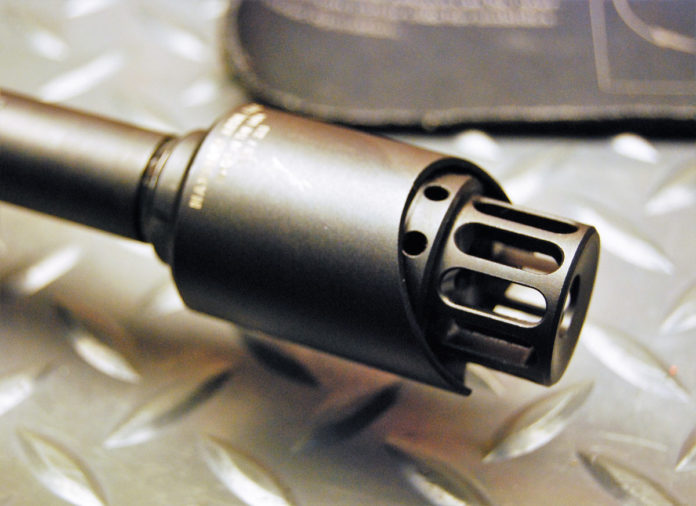 This year Hardened Arms is releasing a new muzzle control device, the HD SMC. It aims to keep muzzle lift at a minimum for increased management. In addition to the HD SMC, they also have produced the LMC which helps with muzzle control but in a distinctive way.

The HD SMC is a small attachment slightly longer than a standard A2 and about twice the diameter. In the packaging, it looks very admirable, like a mini suppressor. However, the look is only just that. This device in no way reduces muzzle flash or noise.

It consists of two separate systems working collectively. There is an exterior ‘shroud’ that houses a series of holes and channels reminiscent of a birdcage. As the gasses come through the end of the barrel they are spinning rapidly and the holes force these gasses around the shroud for an even pressure.

This reduced the lift of the muzzle, specifically in full auto or rapid-fire conditions. What it could mean for any shooter is that the emphasis of shooting can now remain on the target instead of fighting with muzzle lift.

The installation of the HD SMC seems pretty straightforward. It includes the SMC and a jam nut when shipped. After removing the A2 cage from out Hardened Arms 5.56 upper receiver we began to run into a problem.

The HD SMC has a shallow area for a wrench to grab hold. When trying to tighten the SMC the jam nut is unintentionally turned with it since the wrench would grab both. After having discussed this with Hardened Arms they have recommended a set of wrenches that are easily found at Harbor Freight. These are a fraction of the price of AR15/10 specific tools.

To rectify the issue and use, what was readily at hand the jam nut was replaced with a crush washer. This in no way will influence the overall performance of the HD SMC.

Once it was installed there rose the question of complete placement. The forward part of the shroud is to be placed on the bottom and the more exposed birdcage to the top. When lining it up with the receiver the vents at the top of the birdcage are slightly offset from the shroud.

It was unknown if the HD SMC should be lined up via the holes in the birdcage or overall even placement of the shroud. While installing, we decided on the former. It may only be a 5 mm turn so the performance should not have been affected in a critical way.

Taking it to the range at “Gun For Hire,” we set up to sight in at 20 yards and move further from there. The DI Optical DCL30 was attached to the top rail and sighted in at 20 yards. The initial performance was acceptable, but at 20 yards it was truly difficult to gauge.

At 50 yards we reached the limit of our ability with the DLC30 as it doesn’t magnify on its own. We sent 15 rounds down range from standing in a slow progression. Each one hit close to the intended target point. Groupings were a few inches wide but one noticeable change was the time it took to aim after each shot.

What usually would take a bit of time in the 5.56 with the HD SMC seemed to take a fraction of the normal time. I would have generally recommended .223 ammunition for target practice since it’s not as ‘hot’ as a 5.56. Regardless, the HD SMC is not only geared for civilian use but police and military use as well.

If a user intends using the HD SMC as a flash suppressor, it’s not going to perform to the standard they are expecting. It in no way reduces the flash and because of the birdcage being exposed at the top, it may even increase the amount of visible flash for the user. As gas is exhausted out of the barrel and is swirling around the HD SMC does its best to direct those gases back into themselves.

This increased swirl assists to keep the muzzle in place. That means that theoretically, the ignitable gases near the end of the barrel are more constant than with other muzzle devices.

Noise produced was also consistent with standard muzzle devices. In fact, I would dare say it, keeps the sounds right at the end of the barrel instead of projecting it down range.

This may be beneficial for those who want to annoy the shooter in the next stall of an indoor range. It may also be of no concern for outdoor, civilian target practice. For military use that can be a problem. The LMC would be Hardened Arms option if a user’s concern is on redirecting the noise.

While the HD SMC serves a purpose, it’s not intended to be used by everyone. The performance delivered isn’t in question. In fact, it performs just as it should. There is a give and take if using the SMC. With consistent muzzle flash and close-range noise, you’re sacrificing your eyes and ears for better control.

Those who would prefer to have fast, quick control the SMC takes the proverbial muzzle cake. It wouldn’t be recommended to be used in very confined spaces or when night vision is a necessity. There are more valid options for those situations.

The look when attached isn’t the most glamorous. It doesn’t give an Audrey Hepburn or Grace Kelly look (ironically, those are the names of our rifles) and is all about function over form. Hardened Arms has made great strides to make a good-looking attachment despite being a bulge on the end of the muzzle. They have succeeded and with a long handguard and it wouldn’t even warrant a second glance.

Adding this device to a short barrel rifle or AR pistol would by a great option. It would combat the rising muzzle that plagues more AR pistol users. Without shouldering the HD SMC adds just a bit more control than a typical A2 device.

It’s $100 USD. For that price, it’s worth picking up and nearly anyone can add this to their rifle. Adding a muzzle device doesn’t take a professional gunsmith. With the proper tools and torque, the most novice of gunsmiths can have an attachment to their rifle that will increase their accuracy. It may not look perfect on all rifles but when performance is paramount aesthetics can take a backseat.

It should be noted that this device does look like something the enforcement officers may have a field day with, depending on the state you live in. You should check local and state laws before attempting to add this device to your rifle. Because of the unique design, it may be seen as a modest suppressor or flash hider when the reality is quite the opposite.