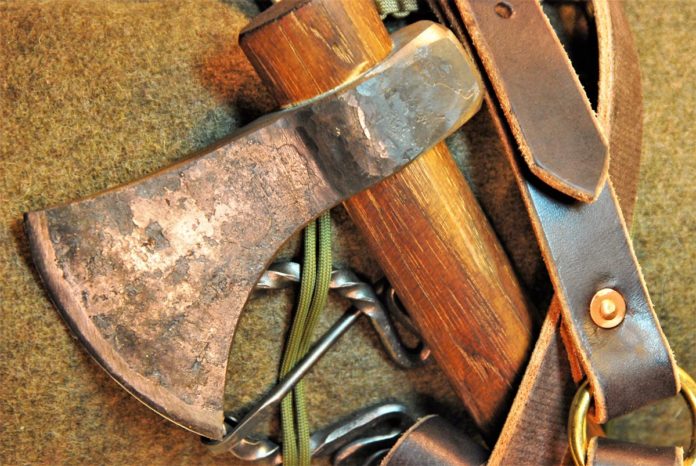 Who Are H and B Forge?

H&B Forge opened their doors in 1965 producing some high quality made tomahawks since those doors first swung open. Nearly all of their products are centered around a tomahawk, pole hawk, or small axe, which has been a staple and necessity for the American outdoorsman for hundreds of years. Over these last 52 years, the quality of H&B’s manufacturing has not diminished in any capacity. Someone would be hard-pressed to find another tomahawk of equivalent quality and manufacturing.

In addition to quality, they also manufacture a wide range of hawks, axes, and knives that would fit a wide range of needs. Rendezvous, bushcrafters, Survivalists, even Military personnel can find something that will fit their needs and H&B Forge is able to help those individuals narrow down exactly what would work best for them. If someone finds that H&B Forge doesn’t have exactly what they need there is an option to reach out and have something made custom. H&B Forge truly fits where other markets and manufacturers have failed to deliver.

Axes, Knives, and Tomahawks are essential to their manufacturing and shop, but they also carry a wide range of sheaths and sheath options. Many of these sheaths are made by local Amish craftsman in Ohio.  One of my personal favorites is a shoulder strapped sheath for those days that I don’t want to carry a pack or a full utility belt. I can strap my camera and tomahawk to my shoulder and head out into the woods without any worries.

Difference Between a Tomahawk and an Axe

The main difference between a tomahawk and an axe (or hatchet) is the handle and the weight. Tomahawks were originally designed to be a utility tool by the Native Americans and metal was introduced by the French and English which allowed the Native Americans modify the stone type of Tomahawks extensively. One of the main differences is the way the head is fixed to the handle. In an axe the handle is semi-permanently affixed and a wedge is placed at the top of the axe head to prevent the handle loosening away from the head.

A tomahawk, on the other hand, is usually a branch-like handle that tapers to a smaller diameter near the bottom where a user holds. The chopping motion with a tomahawk forces the head to push into a larger diameter handle, thus fixing it in place. However, this allows the handle to be easily replaced in the field if broken or to switch out handle lengths dependent on need.

A tomahawk also has a smaller head compared to an axe and hatchet making it significantly lighter to carry. You’re not going to cut down a large Oak tree with a tomahawk without breaking into a very profuse sweat, but you will certainly make a dent. An axe and hatchet are made to dig into the wood and chop with one intended purpose.

What many users find is that a Tomahawk’s head can be removed and used as a standalone tool for removing flesh from animal skins, cutting small items which a knife would normally be used for, and as a wedge for splitting large pieces of wood.

What we commonly see a tomahawk used for today outside of the woods are combat applications. Since colonial times American soldiers have carried tomahawks into battle. Even today tactical tomahawks are commonly used by troops and police forces when a specialized tool is unavailable. The weight allows a soldier or officer to carry a tomahawk on their person without adding more weight than a traditional combat knife.

What We Received and Initial Impressions

After reaching out to H&B they had sent me their Medium Camp Hawk as they recommended it to be a quality tomahawk for everyday carry in the woods. They make several variants of this same hawk in three sized; small, medium, and large with a variation of handle sizes. A quick telephone call and they were able to outfit me with a product they made in a size and setup customized for my specific needs. This customization meant they affixed the shorter (17″) handle, provided the necessary sheaths for my use, and got it to me before I actually needed to use it.

When I pulled it out of the box I was surprised by the weight, especially with high carbon steel. The balance made it perfect for a throwing tomahawk, even though that’s not its intended use. The handle was well finished and firmly fixed to the head. The sheaths were well made, had an extremely tight fit (as they should with new leather), and smelled like an Amish barn. I mean that as a good thing. The authenticity of their product cannot be beaten.

I took a close look at the edge, the finish, and the grind. This tomahawk had a noticeably high grind ‘hip’. What I mean by that is, the hawk seemed to thicken near the edge before it was ground down and some of that thickened steel was still original on the blade and not filed down. The bevel was quite clean, even, and while it wasn’t razor sharp like a knife it was perfect for an edged, chopping tool.

Manufacturers seem to spend a lot of money to make a piece of steel look hammered and natural. Many custom makers make steel look clean and highly polished. What I loved about the finish is that it is a natural, hammered finish. H&B does not try to hide what they are, overly perfect a build, or make a show-off piece. They hold true and embrace what they are and to me that makes this tomahawk more of a show-off piece than anything else. H&B also modeled many of their tomahawks after the style the French trader traded to the Tecumseh Indians.

H&B is also quite precise in how they make their hawks. They use two high carbon steels in 1095 and 1019. 1019 is used around the ‘eye’ of the tomahawk and 1095 is hammered out and makes the main, working portion and blade of their tomahawks. With so much material it’s easy to sharpen these hawks for a long time without sacrificing quality material.

the Patriot on some trees. Each step I took into the woods made me wish a squirrel would pop right out so I could put this tomahawk to the test. My testosterone level had risen just by having it fixed to my belt. I had carried many hatchets and axes into the woods with me, but none felt so useful as this medium camp hawk.

I arrived at my camp, pulled out the hawk, and got to work…. by throwing it. That’s right, the first thing I did was throw it. While it’s not intended to be thrown it can be thrown very effectively.

When throwing a tomahawk make sure it’s low enough to reach when it imbeds itself into a tree and high enough to avoid all rocks. It is difficult to carry a ladder into the woods.

Wish a solid ‘thunk’ the tomahawk imbedded itself into a nice, dead Maple tree. The balance was spot on and the way it fit into my hand just made me feel like I was carrying a pen not a tool or weapon. The ‘hip’ I spoke about earlier really allowed the head to sink into the wood and made it difficult to pull back out. Perfect for a weapon.

But I’m not using this tomahawk as a weapon, I’m using it as a tool and a tool that needs to be well cared for. Now that I got the impulsivity out of my system I could get to work at truly using this tool as it was intended. With that, I put on my gloves, grabbed some thick branches, and got to work making some decent firewood.

The tomahawk did excellent work as a splitter and even as a chopper. Since it only weighs just under 2 lbs it took a lot of force to bring it down to truly chop. So, I set it on a log, bottom edge imbedded into a log, and got to work making feathered sticks for tinder.

A friend of mine, Reuben Bolieu, had corrected a common problem I make in the past. I used to, with a tomahawk and a hatched, hold the stick still and move the blade of the hatchet or tomahawk to create tinder sticks. While it works he pointed out that, “The blade is heavy. It’s better to move the lighter weight item.” With his words still ringing in my ears, I pulled the stick across the blade of the hawk. The blade cut in, feathering the stick with little effort.

After about 4 or 5 sticks I began to feel as if I was playing the violin more than making fire sticks. The bevel ‘hip’ I mentioned before was making it difficult to find a comfortable angle to start the cut into the sticks. I was holding the stick almost perpendicular to the edge of the blade and slowly decreasing the angle as it traveled across the blade until I found that sweet spot. All-in-all it did a great job at a small task.

I did not remove the head, although I did half-heartedly try. I did not want to remove it because I didn’t feel I could reattach it to the head with the same security they had in their shop in Ohio. I also didn’t see a serious need for removing the head unless I was going to use it as an Ulu knife or to remove flesh from animal pelts. Neither option seemed to be beneficial for the article and come hunting season I may follow up with this review to show how the head can be used as an Ulu or to remove flesh from a pelt.

The hawk performs just as it is intended and even surpassed my own expectation. It quickly integrated itself in my EDC woods kit and B-O-B (Bug Out Bag) without taking much room or adding much weight. Having multiple sheath options really allows it to be used in a variety of environments and circumstances which are something very few makers and manufacturers have successfully attempted.

If I had to change one thing, it would be the bevel ‘hip’. While it can still function perfectly as it is, the thinning out of that area would make it easier to use for fine tasks. A few hours and a file should fix the difficulty but would be nice to avoid altogether.