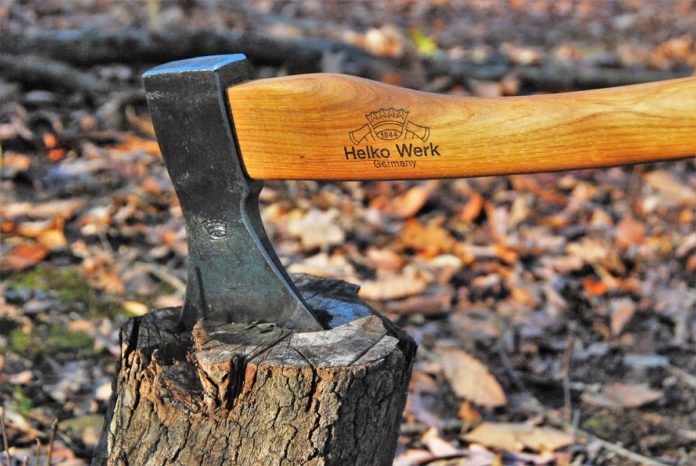 When quality steel is required for tools no other country has a reputation like Germany. German steel is used in medical tools, firearms, farm equipment, and many others. While there is no standard ‘German’ steel, it is generally considered to be of a higher quality compared to steel mined from other countries.

Helko has a longstanding German tradition. They have been manufacturing axes, hatchets, and woodworking tools since the mid 19th century. At this time, before the Great War, manufacturing standards were considerably higher than they are today. Tools did not last a few years and replaced, but in many homes, these tools were meant to last a lifetime.

Helko itself also has a longwinded history of family business, mergers, and buy-outs that aren’t really worth the effort to write about. That is unless you’re a Helko fanboy or fangirl. While I started examining their tools, I wasn’t a fanboy, but that has quickly changed.

We received for review, the Helko Black Forest Woodworker, and Pathfinder.

I used to love going through my grandfather’s garage and looking at all his old tools. It was the highlight of my visits to just stare at the wall and wonder what each item actually did. One tool always stood out; his antique, European ax. It didn’t look like the other axes that he frequently used.

It was meticulously cared for and had a dark patina on the head that reminded me of unpolished silver. It was still a tool, but for reasons not understood at the time, it was a tool that was hardly used.

This particular ax was handmade in Germany using C50 steel. High carbon, drop forged, oil-hardened and obviously heat-treated. The blackened exterior faded gradually into a mirrored finish with a near pristine edge. The handle is more like Frankenstein’s monster. Made from American Hickory, in Switzerland, on a German ax and finished with linseed oil.

Taking just a small look at this ax you can see it makes a statement. Quality is not only a priority, but it appears as if that quality took precedence over its essential function, to cut. Just looking at it makes me want to pull out my cast iron cook set, antique wool blankets, and build a fire just to test the quality. In fact, that’s exactly what I did.

While it didn’t shave the hair off my arm the blade came quite sharp and well protected in its leather sheath. The sheath even has a belt styled clasp, which can be useful if the leather gets wet or begins to change shape. The entire ax, handle and all, came in at 3 and ½ lbs. The head is 2.2 lbs. itself.

Deciding to build this fire that was in my mind I took the ax out to take down a few dead trees. For being 24 inches long the weight surprised me. I was expecting a much heavier ax and didn’t have much faith that my swing would be powerful enough to fell a standard tree without a heavier head. There was only one way to truly find out.

With the first few swings, the ax seemed to easily bounce off of a hardwood. While it did eat into the bark the damage was minimal and I began to wonder how long I’d be swinging. The more continued the swinging the more the blade bit into the wood. What would normally take a few mighty swings was starting to take much less effort. It may have been getting used to the proper way to handle the ax, but I’ll never admit to not understanding tools.

Quickly, the tree began leaning. With only a few more swings it fell to the ground in a mighty thump. Using the handle as a guide, I began sectioning the log in 24-inch sections for firewood and wind walls. With a horizontal log, the extreme curve of the bit (when compared to the size of the ax head) made easy work of the log. Being curved allowed the edge to make contact with the log easily, and from nearly any direction. This was a welcome change from the standard American Axe head design. The lightweight head also allowed for an easy, sweeping swing without too much muscle tensions. For a non-professional, I was becoming proud of my skill. In reality, it is a well-suited tool.

With six, 24-inch sections I was able to move into splitting the wood. This is the one area that this ax did not perform well. Each downward swing allowed me to sink the edge deep into the log. The thin profile and lightweight build made it difficult to sink far enough to readily split the log. The ax was not designed for this purpose, so Helko or their design cannot be blamed for the difficulty in splitting wood.

Using a knife, I made a few wooden wedged from splintered log bits. Using the pole end of the ax head (not to be confused with a pole handle) the wedges were tamped into the logs and was able to eventually split the logs. This gave me an opportunity to move on to the next Helko tool, the Pathfinder.

I love belt tools, and the Helko Pathfinder is a beauty. A highly polished, C50 steelhead and 15-inch hickory handle make this hatchet a statement piece. I almost felt guilty, knowing I needed to rough it up a bit. Almost.

When Helko sent me the Pathfinder, they had started their leather-work and included a leather collar. After having broken several splitting mauls in my lifetime by breaking the handles the leather collar was a welcome comfort. It made the hatchet not only look better but easier to hold and handle when wet or when wearing gloves.

The head was covered with a thick, protective layer. Probably to protect against corrosion, however, a buildup on the edge would take some using to remove. I swung the 2 lb miniature down with excessive force. The thick head managed to split the wood fairly well. It was no 30-inch maul but it did a fine job. Maybe it was just beginners luck, so I swung down again. While imperfect, after a few well-placed swings the hatchet made easy work of the log.

I make it a point to use my thickest blade for the largest number of tasks. In my mind, this means that I may sharpen that blade more often but the tool will last longer than a thin-bladed tool. Making finger sized kindling with a knife is a common and useful skill. I think it’s better to be proficient in using a wider, heavier tool for the same task and be proficient in both. As I said, a larger, thicker tool will last longer than a thin tool. With that, I moved onto making kindling with my hatchet.

As the hatchet is heavier than a tomahawk, like our H&B Forge Medium Camp Hawk, it makes the work slightly more dangerous and much more fatiguing. For most hatchets, I recommend sinking the bit heel into a log and using a rock to force a piece of wood into the edge to be split. Unfortunately, the bit was too shallow on the Pathfinder to make this possible. Regardless, with enough time, care, effort, and stamina the kindling were ready to be dried.

Each of these tools is expertly made and manufactured. While the Black Forest Woodworker was a bit light for my taste it performed better than expected and has an age-old, tested, and proved design that proves efficiency. While the Pathfinder was a little heavy for me, it performed exceptionally well and even gave me a much-needed workout. There are few axes and hatchets that I drool over, Helko made me drool over two.

If I needed to be stuck in the woods with few tools, I would want one of these two with me. Each has a unique use and performs it exceedingly well. The Pathfinder can easily handle heavier tasks outside of its normal design. The Black Forest Woodworker also has a variety of functions that a standard North American Axe cannot accommodate making it a much more valuable tool. Each one will require a bit of time to get used to and truly admire as a tool and not just eye-candy. Each comes standard with a 1oz bottle of protective oil.