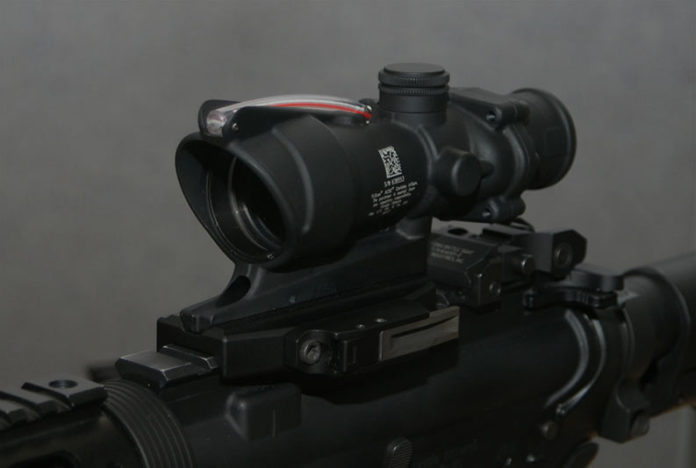 Examining the buzz around one of the best combat scopes

Combat scopes are not something we think about every day and we never really go out to buy them unless we are shooting in competitions or fighting in the marines. Many people never even have the opportunity to shoot with these scopes and they find themselves wondering what the entire buzz is really about when they see the online reviews or when they see the price.

Since shooting at rifle ranges has become quite a staple in my life, I have also been fortunate enough to meet with people with extravagant weapons and also some great scopes on these rifles. Many of them do have combat scopes with which they shoot in competitions and even take on some of the toughest combat courses.

Hunting is one of my favorite outdoor sports, I have not had the use of a combat scope, but after testing and shooting with the Trijicon ACOG 4 x 32 scope, my mind started wondering and my butt started itching to consider investing in a good .223 caliber rifle to try out this highly rated essential that many of the top special forces, including the US Marine Corps, are currently using on their rifles.

First thoughts after being introduced to the scope:

I spent a few weeks studying the fundamentals of the scope and why people are choosing Trijicon. It is also quite expensive and there are still many other combat scopes on the market, but this one seems to pop up everywhere and it was also designed by Trijicon, who is one of the leaders when it comes to combat optics.

I highly rate this product for its combat capabilities and I decided to share my thoughts with you to decide for yourself if you think the scope is worth your money. Many people aren’t fortunate enough to use the ACOG and therefore, this review should help you to understand the intricate details of how it works and how it could potentially improve your combat shooting experience.

Whilst watching and talking to many of these combat veterans and experienced shooters, I noticed that this scope is very intricate. The features incorporated in this scope significantly improve the durability and the versatility of the scope. They also left me flabbergasted when I was told that the scope has been around since 1987 and it is one of the fundamental scopes used on the M4A1 rifles.

Since I am used to hunting scopes, and the average shooting range of 200 meters, this scope took me by surprised with the inclusion of bullet drop compensation for up to 800 meters and once you get the opportunity to shoot with it, you will notice just how big of a difference the 4 X zoom makes when aiming at these extensive ranges.

How I choose my combat scopes:

With all of the intricacies surrounding the combat optics, we thought it would be helpful to share the key features we use to judge and rate the scopes. We also believe that the rifle and the scope should be prioritized and you will be better off spending the most time and money on them compared to alternative upgrades.

Here are the features that we believe are quintessential when looking into combat scopes, especially for combat shooting competitions:

These are by no means, all of the top features, but it is certainly what we consider to be the most important considerations when you are looking for a tactical combat scope. The Trijicon ACOG 4 X 32 scope is one of the most reliable one the market and it does include many important features, which is why we have decided to look a little deeper into this scope which is widely regarded as the “best” scope available.

With a weight of only 9.9 ounces, the Trijicon ACOG is made for combat and when you are on the move. The length is only 5.8 inches and this will be ideal for the .223 caliber rifle when you need to carry it around.  The scope also features a rugged look and it is built from some of the best materials on the market. One marine soldier also took a shot from an AK47 and the scope was strong enough to save the life of said marine.

The added rubber coating on the scope is designed for withstanding impact and since it is fully insulated, the scope will be waterproof and shooting in the rain will not be an issue. The scope features a Chevron reticle and the quality of the glass is immense, which gives you a great picture when looking through it.

Whilst I was testing and playing around with the scope, I was very intrigued by the bullet drop compensator. This compensator ensures that I do have good accuracy at longer ranges. You will be able to effectively hit smaller targets at 700+ yards and if you plan on hunting with the scope, it could make the difference between shooting a trophy or starting it as you try and get closer.

The illumination part is quite intricate and we have sectioned it off for this very reason. The main problem all optic scopes face when they try and add some sort of illumination is the power source. Since many shootouts happen at night when the enemy tries to catch you off guard, you will need something that will give the advantage back to you and an illuminated reticle will be the best way to go.

The most common option used by most reflex and holographic sites is batteries, with the 3V or AAA batteries being used for their lighter weight and smaller sizes. The Trijicon ACOG does not have any battery powered power source to give you that much-needed illumination.

Tritium is the main element used for this scope and since it is an odorless and colorless gas, you might not even know that it is there if you have not done the research. Tritium is a radioactive isotope of hydrogen and it reacts to the human body in the same way hydrogen does. As the tritium is released, it illuminates built-in phosphors and these phosphors will the illuminate the reticle to give you a target to aim at.

The main advantage of tritium is the benefit you have of a longer lifetime, with the manufacturer claiming up to five times longer than batteries. One of the experts also told me that his scope is just starting to fade after 14 years and once you send it back to Trijicon, they will happily refill the tritium and you will be set for the next 14 years.

From time to time, you might have difficulties using the scope during brighter or bad light in the daytime hours. To combat this, Trijicon has added a fiber optic light pipe and this pipe will transmit the light from the one end of the pipe top the other. This will then illuminate the reticle naturally and ensure that the brightness is the exact same match as the object you are staring or aiming at.

Another benefit of having daytime illumination using a fiber optic cable is that you will not have to use any power sources when using the scope. This could save you money in the long term and also save some added weight of carrying batteries.

Should you find yourself in the shadows, the tritium will once again illuminate the reticle and you should not have any troubles when it comes to aiming at a target and getting the kill.

The Trijicon ACOG is an extremely versatile scope and when you add the additional red dot optic, you will have the ideal sights for close or in-house combat. While the ACOG itself is designed for close combat, having the additional red dot added could bake fast-aiming much faster. In competitions, many of the top shooters do have this fitted to their rifles and once they encounter the closer targets of fewer than 100 yards, they are able to quickly take them out with the red dot site.

The red dot RMR does add some weight to the scope and it is pushed up to 15.1 ounces, but with a 3.25 MOA, the accuracy on this scope is immense and will give you some of your best results between 50 and 100 yards.

He price can be argued as the only downside to the scope and it does command quite an expensive price. Since the scope is designed from military grade materials, many people do trust in the scope and they will happily pay the added money, but there are also cheaper scopes or optics available for you to shoot with.

The ACOG does have great features that you might not find in these other scopes and you will need to determine whether you are using the scope for the ACOG features. If not, and you are only a hunting enthusiasts like me, you might be better off looking for something a little cheaper. We recommend the Trijicon ACOG 4 X 32 scope if you can afford it, but you should have some experience when it comes to using it.

We would like to thank you for reading this article and we do hope that you now have the knowledge to make an educated decision about this scope. The scope is truly rated as one of the best combat scopes on the market and once you have had the opportunity to use it, you will see exactly what I mean.

We would love to hear some more comments about how you guys rate the scope and let us know in the comment section if there are any other top combat or hunting scopes you would like us to look at.