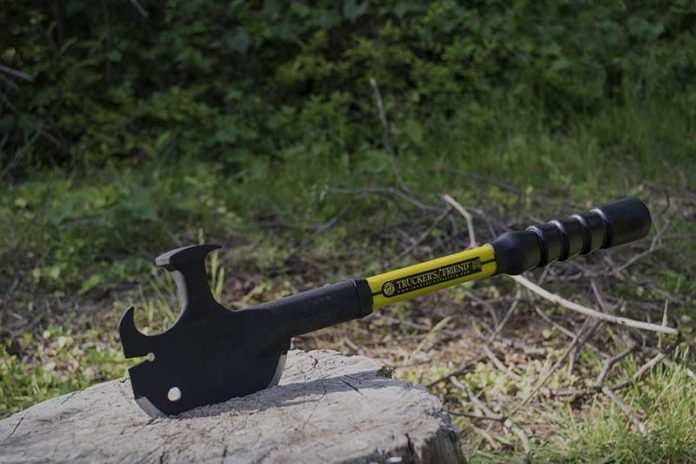 A few months ago I was in search of a new multi-function tool that can be used outdoors, and indoors. Since I work with a few firefighters, police, and Search and Rescue operators I had a specific multifunction tool in mind that might be able to be used across several platforms of use. A quick google search brought up Innovation Factory’s Trucker’s Friend.

The appealing design, multiple proposed uses, and weight didn’t leave my thoughts for a few weeks. Calling up the company, I had the pleasure of speaking to the owner of the company and designer of the Lil’ Trucker (a.k.a. Off Grid Survival Axe), Marvin Weinberger.

We spoke about the design, uses, and functions of the OGDA and Trucker’s Friend. The more he spoke, the more intrigued I became and decided to get my hands on one to give it a try. He informed me, I would need to wait a few weeks because the product is all made in the USA and there was a batch in the current assembly. I wasn’t bothered, after all, a quality product takes quality time.

In the meantime, I looked into the company and their other products. The Off Grid Survival Axe has a comedic zombie video, showcasing all the functions it offers. They also threw in the Lil’ Trucker Companion, a sharpened multi-tool.

While a survival scenario with zombies may be laughed off by serious survivalists it was good for them to show how their tool can be used, sans zombie’s brains.

I opened the FedEx package to discover a bubble wrapped Trucker’s Friend, ripe for the using. The head of the Axe seemed solid with the steel head and fiberglass handle. The hand grip itself felt a little awkward. It is not grooved or oval shaped for a hand, but rather, rounded off with grooved sections, like a bendy straw.

The balance was also awkward. The head of the axe have a lot of weight, for the size, and the handle was a little long for the weight. It seemed like the balance may fatigue a users hand or arm long before the task was completed. Still, I had yet to try it.

Easter Sunday rolled around and we had a beautiful 84-degree day. Slightly overcast and expected to downpour, still the sun was high. This was perfect weather to put the Trucker’s Friend into action. The weather was key. I wanted to be able to put the Trucker’s Friend to use in dry, humid, wet, and warm weather. This type of weather would provide a challenge, especially for splitting wood.

Walking through the woods, to the camp, it dawned on me that the Trucker’s Friend did not have a sheath. After some research, they do make a leather sheath to fit perfectly over the blade and offers shoulder strap to easily carry. I personally have a few issues with that design, which I spoke about in my review of the Boreal21.

Once arrived at the camp, basic maintenance of the camp was needed. The alternating hot and cold temperature drove the pegs in the ground up. It was the perfect time to put the second most prominent feature of the Trucker’s Friend to use, the hammer. Without a sheath, extra care needed to be given to the axe blade placement. When using the hammer the blade comes up directly towards the face and shoulder.

This isn’t much different than a roofing hammer except for the longer handle, which, if you are fatigued may be a safety issue. Regardless, the pegs were easily driven back into the ground with the Trucker’s Friend. It was no effort.

With the camp back in order, it was time to get firewood ready. Sawing off a few short Red Maple logs, from a fallen tree, I was ready to give the axe a shot. I decided Maple was a good wood because it is a hardwood, and when dry can be very easy to split. I pulled out the Trucker’s Friend and took off a few branched with ease.

Something caught my eye, and my hand. The blade of the Trucker’s Friend axe head does not have a flat area but has a pretty steep angle curve. As the axe head made contact with a branch it didn’t easily pass through, but rather glanced off the branch making a slice through the branch. This glancing blow forced the Trucker’s Friend to bounce. Extra care needed to be taken.

With the log prepped and ready, I took a downward swing at the log. The blade sunk in, no bounce; I was thankful for that. The rounded edge did make it easier to remove it from the log. It pulled up fairly easily and with the second hit sunk in even deeper. Each swing, the blade sunk in more and more until the head of the Trucker’s Friend was halfway in.

Sale
Fiskars 378501-1002 X7 Hatchet
Ideal for chopping kindling and small- to medium-sized logs; Chops deeper with each swing to get more done faster
−$5.01

It is called the Trucker’s Friend, and probably for a reason. I can see this easily being used to take the remains of a tire off of a truck wheel, hammering a wedge behind a read wheel with the hammer part, curling wire, opening wooden crates etc.

This is also a perfect defense tool when traveling on the road. The menacing blade is perfect as a deterrent, even if it’s not perfect for cutting.

As a first responder tool, I can also see the possible uses it has. The curved blade is perfectly designed for removing a front windshield, the wedge seems great for pulling sheet metal aside to insert the ‘jaws of life,’ it also will cut through drywall easily making a fire egress simple and fast.

The Good and The Bad

Trucker’s Friend is a multi-tool. I spoke very clearly about the possibilities of multi-tools in our Geigerrig 700T review. As with any multi-tool, it’s usually about quantity over quality.

We think there are some modifications, that when made, could seriously improve on the Trucker’s Friend. Many of these modifications have been made on the new Lil’ Trucker/Off Grid Survival Axe. The major change should be the shape of the axe blade. With more direct surface area an axe or hatchet will be able to cut easily, with little effort. This modification has been made in the Lil’ Trucker/OGSA.

In addition to the axe head, the head itself seems a little too bulky and heavy. This could probably be resolved by removing the excess steel where the “Made in USA” is printed. This could also be rectified by shortening the handle itself.

Overall, this is a great tool if you need something for odd jobs or travel. It’d be much more intimidating pulling an axe from your truck than a baseball bat. Really, this does seem like a menacing tool. It is reminiscent of a Viking axe and probably would function as well as a Viking axe. Truly, we are impressed with the multitude of uses the Trucker’s Friend offers.

In a pinch, the Trucker’s Friend would make a great survival tool but, we’d still recommend when carrying something as important as an axe to have a dedicated axe or hatchet handy for a survival situation as opposed to a multi-tool.